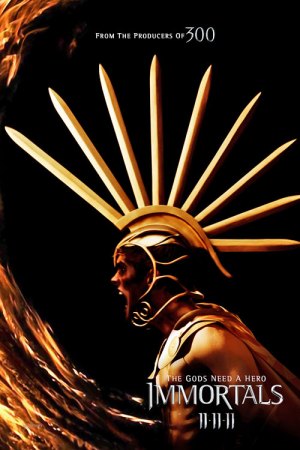 Immortals is probably one of the worst movies I’ve ever seen.

Based loosely around Greek mythology, Immortals tells the story of a young man named Theseus who must lead the Hellenes to victory against the evil King Hyperion. There are are a few Greek gods involved as well (I’m actually not sure who half of them were – the movie never tells you) but they mostly restrain themselves from interfering in mortal affairs until the titans (evil gods) are released.

When a Hollywood movie is based on Greek mythology you know that it’s probably going to be pretty bad. Immortals, however, is somewhat surprising in this regard – it’s even worse than you probably expected.

One of the most embarrassing tropes of the sword-and-sandal genre is back in force in Immortals: painfully ridiculous costume design. Every single character in the movie is dressed stupidly. The gods wear a horrible array of uncomfortable and totally impractical golden monstrosities which are (I can only assume) supposed to be some form of armor; the evil warriors would fit in at most Halloween parties; the good guys love showing off their well-muscled chests and thighs (who needs to wear armor that actually provides protection, right?); the sacred virgin wears incredibly revealing dresses (probably not the best idea if you intend to remain a virgin – and, surprise surprise, it eventually turns out that she doesn’t); and King Hyperion has a variety of hats that even Lady Gaga would hesitate to wear.

The acting in the movie is pretty awful – but I suppose the blame lies more with the tedious and dull script than with the actors themselves. Mickey Rourke plays the part of the villainous Hyperion and he’s not bad, although he’s pretty much the same character you saw in Iron Man 2 (he eats a lot during this movie though which is new). Henry Cavill, playing Theseus, is frankly pretty rubbish; he fails to inject any real emotional depth or character into his role. None of the other characters are particularly memorable; Freida Pinto plays a mildly interesting and fairly attractive virgin oracle, but she basically disappears from the movie as soon as her sex scene is over.

While John Hurt does a good job of playing “Old Zeus”, Luke Evans is horribly miscast as “Young Zeus”. For the super-powerful ruler of the gods he’s a rather scrawny fellow, and I cried every time I saw the mustache which he was apparently trying – and failing – to grow. Though, to be fair, he does quite well at the actual acting part.

The writing in the movie is also pretty atrocious. Dialogue is cringe-worthy, and characters are extremely weak. Theseus is easily one of the least like-able protagonists of all time (out of the ones who are supposed to be like-able anyway). Half of his scenes involve him pulling a weapon on someone and threatening to slit their throat. The movie opens with a quote from Socrates, “All men are immortal. But righteous men are immortal and divine.” Apparently Immortals‘ idea of a righteous man is someone who is a total jerk who kills lots of people. Maybe that’s what Greek mythology says – I don’t actually know. What I do know, however, is that it is definitely not what Socrates was trying to say; everytime this movie plays I’m sure he’s turning over in his grave.

Immortals does at least have a unique visual style. But, while it is unique, it’s also not pulled off very well. Set-pieces are very obviously CG and aren’t even very interesting. These typically involve a flat brown expanse and a large building constructed out of huge  bland blocks of either black or brown rock. This movie seems to suffer from the delusion that if you make something boring and then multiply it hundreds of times it will look interesting. It doesn’t; it’s still boring. This applies not only to the environments of the movie but the large armies that inevitably crop up as well.

The one good thing I can say about Immortals is that some of the action is actually pretty good. When the humans fight it’s nothing mind-blowing, but it is at least hectic and entertaining. On the few occasions when the gods decide to fight though you’re in for a treat. They do this a couple of times during the movie, and there’s even a long and epic fight between them and the titans at the end. These fights are very stylishly shot, involving the use of a cool slo-mo effect and excellent choreography. They pack a ton of seriously entertaining visual oomph and provide the sole redeeming touch in what is otherwise a travesty of a movie.

The score of the movie also does its job decently. But I strongly suggest that you simply wait until these few interesting fight scenes are ripped to Youtube, then you can watch them at your leisure and avoid the rest of it.

After watching Immortals I really couldn’t help feeling that I’d watched what was essentially an adaption of Power Rangers for teenagers and young adults. Albeit, one that is totally lacking the colorfulness and shameless campness that made Power Rangers fun when we were kids.

Simply put, this is a really bad movie. A couple of times while watching it I seriously contemplated leaving the cinema, and only my resolve to write a review on my blog stopped me from doing so. If you don’t intend to write a review yourself, then I strongly advise you not to put yourself through this unpleasant experience like I did.